Benedict was widely regarded as having deep and wide human feeling and his moderation. After attending primary schools in Norcia, Benedict went to Rome to study literature and law. In his later years and after being disenchanted by the nature of man, he retired with a group of priests and later went into seclusion for three years in a cave.

A group of shepherds and common men, began to follow his teachings and the pastoral and thus the apostoli 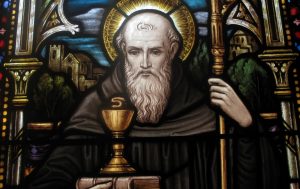 After founding twelve communities of monks at Subiaco, Italy, Benedict traveled to Montecassino where he established a monastery and wrote “The Rule.” This simple set of guidelines for how the life of a monk should be lived has become one of the most influential works in all of Western Christendom.

During his life, Saint Benedict performed many miracles. He found water on a desolate mountaintop to quench the thirst of his monks. He retrieved a bill hook’s iron from the bottom of a lake and rejoined its handle. He prevented a monk from leading a dissolute life through intervention. In addition, he made Maurus walk on water to save the young Placidus from drowning.

Saint Benedict devoted himself to evangelizing the local population who practiced pagan worship. Shortly before he died, Saint Benedict saw the soul of his sister Saint Scholastica rising to heaven in the form of a dove.

In the end, a life so noble was justifiably followed by a much-glorified death. According to tradition, Saint Benedict died on March 21, 547 AD. He foresaw his coming death, informing his close and faraway disciples that the end was near. Six days before dying, he had the grave which he was to share with his deceased sister Saint Scholastica, opened. Then, completely exhausted, he asked to be taken into his oratory where, after taking his last Holy Communion, he died supported by his monks.